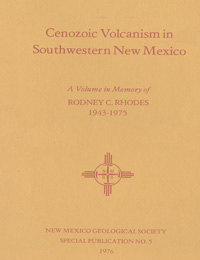 This volume has been a long time in the making. The call for papers went out in late 1970 and papers were received in 1971 and 1972. Plans called for publication as University of New Mexico Publication in Geology No. 8. Tentative approval had been obtained before the call for papers was issued but by the time papers had been reviewed and edited, the great financial crunch of the 1970's had struck in academia. UNM Press has an established reputation and market in the humanities and social sciences but was uncertain about the physical sciences. In 1973 the plan for University of New Mexico Publication in Geology No. 8 had to be abandoned.

Efforts to find an alternative publisher were successful in May 1975, when the Executive Committee of the New Mexico Geological Society voted to sponsor this volume. Rodney Rhodes' tragic death had occurred just two months before and it was decided to dedicate the volume to his memory. The technicalities of preparing manuscripts for the printer became less overwhelming when Stuart A. Northrop agreed to accept coeditorship. To save printing costs, all bibliographies were combined into one at the end of the volume.

In the meantime, science had not stood still. All authors were given an opportunity to revise their manuscripts. In general, papers that describe particular areas had remained up to date. Papers that interpreted the data required extensive revision. Specifically, all papers of which I am author or coauthor were written or completely rewritten during 1975 and early 1976. All other papers are essentially as they were in 1973. One article that had been cited in the literature as being "in press" was withdrawn by the authors: Seager, W. R., and Clemons, R. E.,"Volcanic chronology and structure of the Blue Creek basin region between Clifton, Arizona and Cliff, New Mexico."

In the years between 1970 and 1976 the growth of interest in Cenozoic volcanism in western North America has been astonishing. Volcanic rocks, once regarded as mere overburden by prospectors, have turned out to be a key in the understanding of plate motions, composition of the Earth's interior, the distribution of mineral deposits, and the evolution of planets. My views have certainly changed drastically since this volume was first conceived, as the implications of plate tectonics and the Apollo program became apparent. It is hoped that this volume will fill some of the need for specific regional information.

This volume recounts some of the progress of the last few years but it also points to the gaps that remain. Information on trace-element and isotopic composition of Cenozoic volcanic rocks of southwestern New Mexico is scanty. Crustal structure is virtually unknown. The timing of events remains uncertain and controversial. Above all, large areas remain unmapped and many conclusions and correlations rest on shaky ground. The work is continuing and whatever we may say this year, next year we may know better.

Stratigraphy and structure of the northwestern part of the Mogollon Plateau'volcanic province, Catron County, New Mexico

Tectonic significance of mid-Tertiary volcanism in the Basin and Range province: A critical review with special reference to New Mexico

Figure 2. Residual gravity and geologic map of the Mogollon Plateau